THANK YOU CALGARY
​
WITH YOUR HELP, CODY SNYDER BULLBUSTIN' 2022 RAISED OVER $340,000 FOR OUR LOCAL CHARITIES 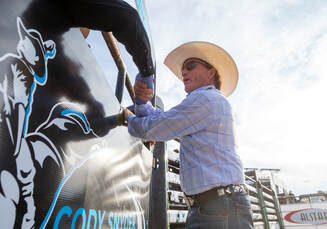 For the past 25 years, Rhonda and Cody Snyder have been producing professional bull riding events across North America. Together, Cody’s title as a World Champion Bull Rider and Rhonda’s background in marketing and public relations welcomed a successful partnership in creating innovative events across the country for over two decades.

In 1993, Cody suffered a career-ending injury that strengthened his never-ending passion for the sport of professional bull riding. Cody’s frustration of having to prematurely quit the sport he had built his life, career, and mindset upon sparked a new vision, producing events of his own. Four months later, Rhonda
and Cody produced their first professional bull riding event at the Stampede Corral in Calgary, AB.

Bullbustin’ Inc. was the first of its kind to incorporate pyrotechnics, lighting, and sound that generated an event that was more than just bull riding. Alongside their dedicated team, Cody and Rhonda created an innovative experience that would be the start of a new era for professional bull riding across the world.

With a passion for giving back to the community and those in need, Cody and Rhonda created the first Cody Snyder Charity Bullbustin' in the summer of 1999. The event has raised over 2.5 million dollars for local charities and continues to positively impact the lives of thousands across the province.

The Cody Snyder Charity Bullbustin’ features the top bull riders in the world competing for over $50,000 in prize money, with all points won counting toward the PBR World Finals in Las Vegas. The event has raised over 2.5 million dollars for Alberta charities, supporting Special Olympics Alberta, Canadian Mental Health Association Calgary, Luna Child and Youth Advocacy Centre and The Central Alberta Child Advocacy Centre
in 2023. Enjoy the best Stampede party the city has to offer with ice-cold drinks, guaranteed pre and post-party access featuring live music, and an unrivaled bull riding experience held at the Grey Eagle Resort and Casino this July 4, 5, 6 & 7th, 2023.